Franklin McMahon (1921 – 2012) was an artist-reporter whose work took him around the world for more than half a century.

His work can be found in the permanent collections of the Library of Congress, the National Air and Space Museum (of the Smithsonian Institution), The University of Chicago, The Borg-Warner Corporation, Time Inc., Binghamton University, The New Britain Museum of American Art, George Washington University and many other well known locations.

McMahon won the Renaissance Prize of the Art Institute of Chicago. The Society of Illustrators elected him to its Hall of Fame in 2001, and the Artists Guild of New York chose him as “Artist of the Year” in 1963. His documentary films of several presidential campaigns earned him three Emmy Awards and a Peabody Award. He also received the Minority Economic Resources Corporation’s Martin Luther King, Jr. Award for Civil Rights Achievement (2000), and honorary degrees from Loyola University Chicago (1985) and Lake Forest College(1979). He was a part of the guiding faculty of the Famous Artists School and served as a guest instructor at Syracuse University, Rhode Island School of Design and The Smithsonian Institution.

He could be acclaimed as Chicago’s ambassador to the rest of the world. His art says so many complementary things about the city of his birth: The energy, the excitement, the joy its citizens find in their work. The magnificent buildings, the music… even the beautiful lakefront takes on extra buoyancy and life under his gifted hand. A city could not ask for a more loving and flattering portrait and one created by Franklin McMahon.

This short biography only scratches the surface of this great artist’s accomplishments. For more in depth information, please visit Wikipedia, from which this information was obtained.

On Offer: The work on offer, “Burnham Harbor”, captures the very essence of Chicago. It is one of two original serigraphs from his collection, “MY CHICAGO:AN ARTIST’S TRIBUTE”. It was acquired at Merrill Chase Galleries during the time when we lived in Chicago, around 1978. (Dimensions to follow.)

From the Gallery: Franklin McMahon, The edition consists of:

All prints are hand signed by the artist. this is the only addition there are no prior additions this is neither a re-strike nor a posthumous edition. The screens have been destroyed. Printed by the Chicago Serigraph Workshop, Chicago Illinois in November 1978. 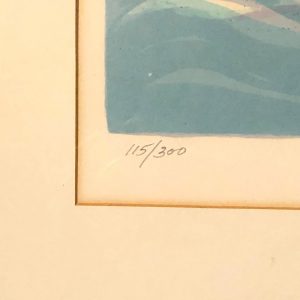 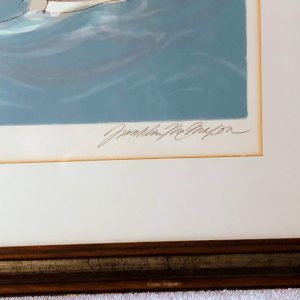 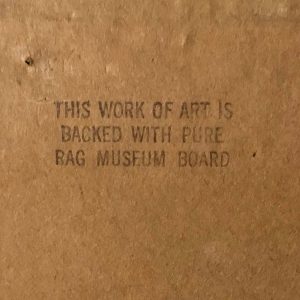 Bob Byerley (1941-2019) was an American painter whose specialty is internationally known for his realistic portrayals of children in nostalgic settings; settings that reflect his vision of a “kinder and gentler” childhood. Bob’s work is represented in many beautiful collections and can be seen in thousands of galleries throughout the world.

The work has been professionally matted and framed in a beautiful Koa wood frame. Koa is perhaps the most ancient tree species in the Hawaiian Islands and has long been as a high quality wood, prized for its hardness, strength and resistance to water absorption. A certificate of authenticity will be included upon purchase.

Markus Pierson is an American Artist and Sculptor who started his work life as a bookkeeper. After a near death experience, he told his friends that the bookkeeper was dead and in his place was a man going to become a successful artist. He started the Coyote Series two years later after being inspired by the Joni Mitchell song, “Coyote”. The series was a quick success, and within a year his art was being sold in galleries all over the country.

“Sunset Cafe” is a 23″ high bright and whimsical work that is sure to find a place in any home or office. Copyrighted in 1990, it is number 342 of an edition of 350 acrylic on wood sculptures. This item was purchased at Merrill Chase Galleries in 1993 and has brought us years of enjoyment. It is in excellent condition, and a Certificate of Authenticity will be included with the sale.

Salvador Dali (1904-1989) was a Spanish artist born in Figuera in Northern Spain. His artistic talent was noticed at an early age, leading to his acceptance into the Royal Academy of Art in Madrid. Best known for his later surrealist works, his art journey touched almost every style and media. Some of his early works are actually quite classical and excellently executed.

This original work, “Coronation of Gala”, is a hand signed limited edition (15/150) lithograph on arches paper, c.1976. The series is listed in “The Official Catalog of the Graphic Works of Salvador Dali“, by Albert Field and is immensely popular with collectors and are therefore difficult to find. Also known as “The Empress”, or “Gala, Empress of the World”, it was purchased in 1976 at Merrill Chase Galleries in Chicago and comes with a Certificate of Authenticity. It is hand signed and numbered in white pencil on the image.

This work is framed and behind glass, so please forgive any reflections or shadows in the photograph.

Bob Byerley (1941-2019) was an American painter whose specialty was painting kids and memories of yesterday in Art Prints and Original Paintings for sale. In this painting a couple of little kids are looking into the front window of the towns Toy Train Store, painted in Artwork on sale painted by Bob Byerley “Painter of Our American Childhood”. All prints have been hand signed by the artist.

“When I was a child, one of my most favorite things to do was to go for a ‘family walk’ after supper. Mom, Dad, my little brother and I would walk over to Broadway, our small town “business district“, and leisurely stroll the sidewalks looking in the storefront windows. Each of us had a favorite window. Dad liked the hardware store, Mom loved Hathaway’s Dry Goods, and my little brother would race ahead to the pet store windows and the cocker puppies. My favorite, by far, was ‘The Train Shop’. I would stand and gaze at the beautiful shinny locomotives on display and dream of a huge layout of my own that I would build when I grew up. My family would patiently wait up on the corner until my little brother would run back to pull me along to our final destination of the evening, Carter’s Ice Cream Shop. The chocolate revel was great but if I could have had my way I‘m sure I would halve chosen to spend those extra minutes looking through ‘The Train Shop Window’.” ~ Bob Byerley

The Train Shop Window is a limited edition Giclee canvas print of an original oil painting published in 2005. The edition was limited to 295 impressions including 30 Artist Proofs, of which 3 Artist Proofs (17, 18 and 20) are available. Artist Proofs are perhaps the most valued of his collection because he did more on each one than just a signature. He enhances the canvas with oil paints just like someone at the studio does for the signed and numbered canvas, but he adds to it his own style, and of course they are in shorter runs to keep with tradition. Each item is signed and numbered, personally enhanced by the artist with signature on the reverse, having a 12″ x 16″ image size on a canvas of 17″ x 21.25″. They have never been displayed or framed and have been kept in climate controlled conditions, rolled in the original container since they were purchased in 2005 at a Pacific Fine Art Gallery in Kona, Hawaii.

Below are photographs of all three works (click to enlarge): 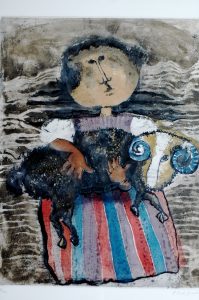 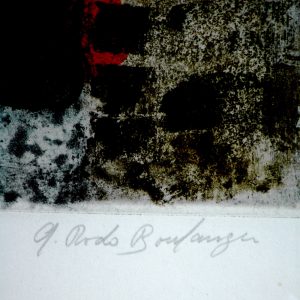 Some ads on this website may use cookies to ensure that we give you the best experience on our website. If you continue to use this site we will assume that you are happy with it.OKPrivacy policy